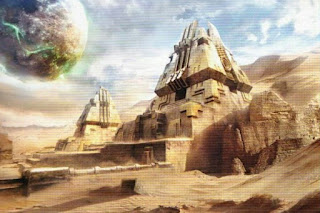 Welcomes Back Ladies and Gents,  we're today we continue our look at the new (the book and models have been out a while - Evil Daemon-Monkey on Shoulder) units for Necrons in Imperial Armour 12.

Today we look at the little brother of the Canoptek Tomb Stalker,  no not the Canoptek Spider,  this bad boy... 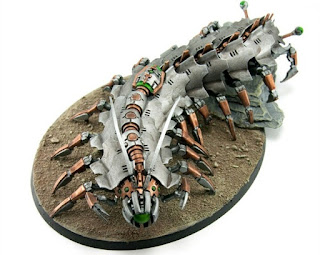 The Canoptek Tomb Sentinel, is a variation on the Tomb Stalker construct,  cited as one of the final war machines designed by Toholk the Blinded (maybe this means he is also responsible for designing the Stalker as well...). With a comparable statline and special rules to the Stalker, also being a monstrous creature, the Sentinel however forego's 2 attacks to gain the Exile Cannon.

The Exile Cannon is a 12in StrX, Ap- Heavy 1, small Blast, weapon with the exile blast rule. Now this does not look good until you look at the rules for exile blast,  which state that all models under the template equate to the number of hits resolved against the unit. Randomly determined models must then pass a strength test or be removed from play,  with units with no str value auto passing. Vehicles and buildings suffer an automatic penetrating hit with no saves possible.

This works beautifully with the Tomb Sentinel's Deep Strike, outflank and fleet special rules and could be considered to be a great way to deal with enemy armour and elite units. Twinning the Sentinel and the Stalker together as well, could make a great combo for hunting super heavy vehicles and Gargantuan creatures. And with non-vehicle Lords of War,  a great way to remove pesky units that could be a major hindrance. Chapter Master with Shield Eternal, no problem,  one failed straight check and buh-buy. At 39 melta bombs I feel this unit is an absolute steal. It might not have the close combat output of the Stalker,  but I feel keeping Rampage nicely offsets this downside. Overall I think this unit might actually be slightly better over all compared to its brother. Also always make sure to have the points to take sepulchral scarabs to increase its survivability.

Of all its rules,  only the ability to take a gloom prism needs amending for use with the current codex as the way the equipment works now is different to how it was in IA:12. Just use the current codex ruling and this will slot straight into any Necron list nicely in the heavy support slot. I feel it would also work brilliantly in a themed battle where you have another mecha-bug to defend your Tomb Complex (which funnily enough is what we will be looking at next time).

What do you think of the Tomb Sentinel,  good? Bad? Meh? Let us know in the comments.

Until next time,
Jonathan