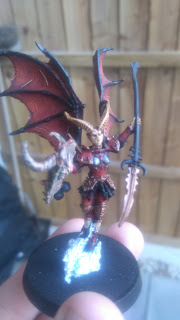 So Ladies and Gents,

Its been a wee while since I last dipped my feet into the well of possibilities that is Age of Sigmar. So today I thought we would have a look at,  in one of my opinions,  one of the game systems strongest attributes - strong female representation.

Now I won't get into the mirky mess that is, feminism in gaming, and the lack of strong female character models in other gaming systems, as this has been covered by people more knowledgeable than myself,  though for myself I have great expectations for Warhammer 40,000 in particular with the re-release of Saint Celestine, in her beautiful new cast (I can't wait to get my hands on her model...  Wait...  That doesn't sound quite right... Swif-tly moving on...), the Geminae Twins and, what this may mean for the return of Sisters of Battle.

So getting back to the Age of Sigmar,  this foundation of representation of female characters could only be achieved by the stellar work that was put into the Old World and exhibiting it with Warhammer Fantasy Battles. 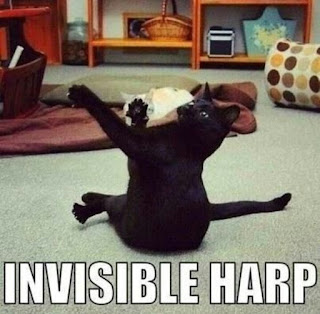 If we take a trip back down memory lane (for me,  what are you doing here in my head? Wait for me to type it...), just before the End times were upon us in WHFB, I was in a hobby rut,  so I did what any heathen and Heretic would do,  and started looking at other gaming systems.  Not wanting to stray too far from the pack,  I began looking into the fantasy range of miniatures by Games workshop.

But making such a decision is always hard to make,  so I turned to the most important person in my life,  my other half Kelly. After much humming to and fro over what army to start we settled on the Dark Elves, primarily because of the amazing hairdos that the Witch elves had (you can imagine which one if us used this as the major deciding factor... Bonus hint I am going bald 😝). 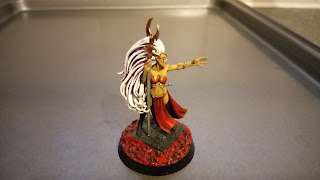 That's some proper rockers hair there,  bring back memories of being able to mosh

But if we look past the hair for a moment we can see a breakthrough in the development and production of these figures. No longer was dynamic and accurately (for the time) body proportions used outside of character models,  but to showed that games workshop could design the female form for base units, without necessarily being used for titillation as many other companies were, and are won't to do even today (I'm looking at you raging heroes - yes they look amazing but they are just miniature titillation).

At this point it would be remiss of me not to mention the Bloodrack Medusa,  also produced at the same time as the Witch Elves, and the infamous breast that was brought up at the time on the Internet.  But if we look at the concept of the model, that it is aiming to show the twisting of, what is considered to be beautiful, to the horrific, we can see that showing of what maybe consider taboo has gone beyond merely physical to something more psychological and deeply troubling. Maybe I'm reading into this too much,  but I like to think these sort of considerations go a long way to making a great model,  and personally I think the medusa is. 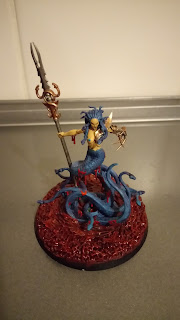 Who says snakes can't be blue

At the start of the article I showed a picture of my WIP for Valkia the Bloody, another great model (but one I wish they had kept in metal, only because her spear Slaupnir really would benefit from pinning due to the small joint at the wrist). She is our power fantasy for females, and in my opinion the best character in the Bloodbound Battletome. Just like how she plays in the game she is aesthetically modelled to be fast,  agile and utterly deadly. A misconception I have seen previously, is that power fantasys are usually limited to the over-muscled killing machine,  and though Space Marines fill this aspect nicely nine come close as Skarr Bloodwrath. Dude is ripped, so ripped he looks like he burst out of his skin.  So I love the juxtaposition of these characters, diametrically opposed aesthetically,  but filling the same outlet as a painter and a gamer.

Games Workshop has a great opportunity coming up with the highly anticipated Aelves releases for all of the previous iterations (High,  Dark and Wood), which has been shown with the recent Mistweaver Saih for Warhammer Quest: Silver Tower,  to really make some astounding female characters. I look forward to seeing what they bring us soon. 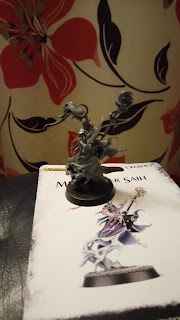 Soon my pretty... Soon it will not be too wet to base spray you...

Until next time
Jonathan
Posted by Unknown at 12:00