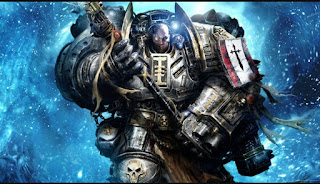 Hi Everyone,
Following on from yesterday's entry we have part 2.  Hope you enjoy.

Everything flashed into the brightest shade of blue-white. Control panels screamed warning claxons moments before their screens exploded into flames.  Chapter serfs ran in semi-panicked directions before their mental conditioning kicked in,  as one moving to bring the inferno now raging in the Astropathic Choirs' Coliseum.

Screaming echoed from the lofty heights above. Most of the overhanging astropath thrones were occupied,  their incumbents unaware of the fire spreading slowly from one to the next.  They were slowly burning one by one.

Codicier Suor'kah'peth entered the coliseum from under the choir masters pulpit in the middle of room. Runic wards glowed from every surface as the warp tried to force its way into the material realm through the minds of the astropaths. Suor'kah'peth watched impassively as the Chapter serfs one by one gave the Emperor's Mercy to each of the astropaths who's Runic Wards had begun to burn a firey red.  Hitting a Vox comm on the wall the Codicier gave the word to the bridge that an emergency exit from the warp was required.

Time stopped. It always felt like this for Suor'kah'peth. Reentry always felt differently to each of his brothers, not painful or discomforting,  but for the Codicier a moment of peace before the enevitable storm soon to follow.

With a burst of sickly light,  the Titans Rage exited the Immaterium. The Battle Barge dragged contrails of pure emotion behind in its wake. It had arrived in the Yrlan's System...

Suor'kah'peth strode with purpose into the Strategium having ensured that all those astropaths almost tainted by the warp had been dispatched. The Codicier wiped his gloves on a folded tabard from his belt,  a few extra astropaths having been given the Emperors Mercy just in case by his own hands. Less than 70% of the choir remained.  Suor'kah'peth walked towards his brother Company Champion Benefalan.  "Brother,  it is done.  The pacification is complete. Do we know what happened to the wards?"
"I do not know brother", the flickering light from 10,000 candles refracted across his shining silver armour. . His bulk was massive in Tactical Dreadnought Armour,  the runes of warding engraved on every surface had been only just painstaking repaired since his last battle.

The gods of war stared deeply into the turning light of the Strategium hololith as it spun focused on the primary world of seven planet system. "There are no in system contacts Codicier" Benefalan rumbled,  "No system picket ships no, no PDF communiques,  no astropathic songs either. This system seem dead".

Suddenly the doors to the Strategium burst open, a chill wind following inside that even made the Transhuman warriors shiver,  "Its not quite dead yet my brothers, we have work to do" came a calm yet deep voice.  Codicier Suor'kah'peth spun around force staff at the ready, his strike did not fall.