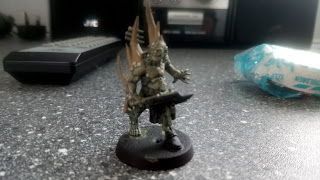 Welcome to today's entry, where I will be discussing the statistics for the armies that will be coming to the Never Mind the Blog Wars event coming up in November. I would suggest you swing by Alex's blog and behold the pie-y goodness he has prepared before continuing with my thoughts (he put a lot of effort into them and I'm not going to steal them 😝). So, stop dilly dallying and pop over to fromthefang.blogspot.co.uk, and I'll see you in a moment...

Back? Excellent! Onwards with my ramblings!

So firstly, don't expect me to follow the pies an exact order, these are just my thoughts as they come... So! It would appear that not every army taking part is solely isolated to those with codexes alone when looking at the split between xenos, Chaos and imperium. Granted some of these armies will be additional Detachments, but it is still good to see that players (apparently) aren't immediately jumping on the bandwagon of codex released armies.

After talking with my good friend Ian it would appear to be that every player will have a 1-5 chance of drawing a guard list in the first round, and with my expectations of absolutely ridiculous gun line armies this may present an issue for some. Rules for damage limitation, such as disgustingly resilient or the tau's stimulant injectors will only go so far when you have to save against multi damage weapons (can anyone say leafblower? 😜). I know mortarion, can be blown off the field from concerted artillery fire and multi damage weapons, even with how tough he is to crack. On the other side of the coin, guard players drawing another guard list will be a long struggle through the mud, it will be interesting to see how well guard lists will do at the event.

One army in particular ill be interested in seeing make it to the event, will be the adeptus custodes army. I have yet to see a painted army in real life so that will be a pleasure to see, (and play against if we are both drawn against each other).

Interestingly enough, Roboute Guilleman won't be making any appearances for the armies of the imperium, though I expect some space marine/guard/soup lists may see Saint Celestine make an appearance due to her (reasonably) low cost. On that note, come on GW, give us sisters already!!! Primarchs will be limited to chaos, and as such it will be interesting to see if either mortarion or magnus comes out on top after the event. There is also at least the chance for an epic duel at some stage between the chaotic brothers.

Lords of War particularly Imperial knights are seeing a reduced appearance this time round, though I expect we would have seen more baneblade variants in guard lists, had they been one wound lower, or the wound limit for the event being one lower.

I think Alex has made a brave choice in putting in the limitations of 25wounds per unit, and no more than 3 detachments. Though this did seem to cause some tension on social media in the lead up to the event, I feel that it is the right choice for now, until more players have a chance to become more used to the system, and Alex has a chance to see how things play out at a tournament level.

It wasn't a surprise to me the most common detachment was the battalion, it gives extra cp and is close to what everyone is used to from previous editions. It will be interesting to see how this changes as more armies get codexes and the different play styles for each develop further.

Key to the event will, in my thoughts be Admin management, and really knowing your list. I'm taking 3 Detachments from DG/Daemons, so hopefully this won't be too bad for myself. This will be, I imagine the first singles tournament of 8th for many, so sticking to the time limit and getting the best out of all your units will be key,especially if you are using several different armies in different Detachments. Let's also not forget sticking to the mission as well, tabling your opponent won't always be the best course of action.

Well, that's all I have for thoughts right now so it's just the waiting game now until the big day. I hope you all enjoyed reading my attempt at random punditry.

Oh, and who will win? Who knows, I won't pretend to know all I'll say is #chaos

Let me know what you think down in the comments.
Until next time
Jonathan
Posted by Unknown at 20:02