The Gardener and the Girl 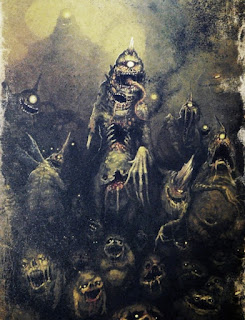 A warm wet miasma wafted through hanging leaves, the rustling of dark, mottled, rotted flora, a constant comforting din. Occasionally, the lonely clang of a drop of dew from the leaves sounded out from the metal grid that the trees had sprouted from.

Cracked leather boots gently walked through the developing undergrowth, each small step carefully placed to avoid stepping upon one of the grandfather's creations.  It was a great boon for family that his garden had taken root here. Only a small garden in the depths of the ship, but a blessing none the less.

Darrelia, slim, almost willowy, showed few of the blessings her family had received, many having joined the jovial oblivion of the walking pox. Her sunken eyes, and small stature were the only hallmarks of the blessing she had received, a blessing to be kept deep not only in her heart but in her soul.

The soft settling of a claw cupping her shoulder startled her but for a moment. Beresius had arrived from the depths of the gardens oubliette, a small walk from here.

"Konor, some would think was a failure, but do not worry my child. Life will thrive again in the shadows, and our grandfather will be happy".

"Where do we go now Father?" Darrelia whispered to Beresius.

"Grandfather's chosen grandson will lead us and his blessed sons to a new world, a world to bless, a world I will not see, for I have been called"

Darrelia, looked in confusion as her father shambled to the closest tree, sitting down beneath its rotten bows. The roots slowly enveloping him.

"I must go now for the Grandfather has called me to his garden in paradise. Tend this garden here, until another comes, then you too will be called to walk in the true garden of nurgle".

Outside in the dark of the void, a rusted hulk floated harmlessly, dangerously towards the edge of the system. From afar, the flickers of sublight engines would be all that would herald the departure of the Vectorum Ephfluvious.